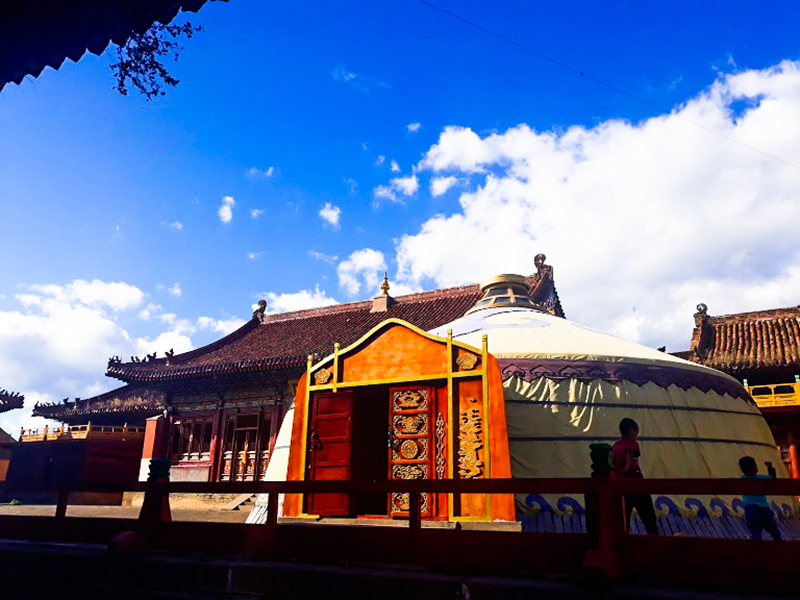 Amarbayasgalant Monastery or the “Monastery of Tranquil Felicity”, is one of the three largest Buddhist monastic centers in Mongolia. The monastery complex is located in the Iven Valley near the Selenge River, at the foot of Mount Buren-Khan in Baruunburen soum of Selenge Province in northern Mongolia. The nearest town is Erdenet which is about 60km to the southwest.

The monastery was established and funded by order of Manchu emperor Kang Xi or Enkh-Amgalan Khan to serve as a final resting place for Zanabazar (1635–1723), the first Saint Jebtsundamba Khutagt, or spiritual head of Tibetan Buddhism for the Khalkha in Outer Mongolia. According to tradition, while searching for an appropriate site to build the monastery, the exploratory group came across two young boys, Amar and Bayasgalant, playing in a field on the steppe. They were inspired to build the monastery on that very spot and to name it after the two children, Amar-Bayasgalant. Construction took place between 1727 and 1736 and Zanabazar’s remains were transferred to a newly created temple in 1788.

Unlike the Erdene Zuu monastery, which is an ensemble of temple halls of different styles, Amarbayasgalant shows great stylistic unity. The overriding style is Chinese, with some Mongol and Tibetan influence. Originally consisting of over 40 temples, the monastery was laid out in a symmetrical pattern, with the main buildings succeeding one another along a North-South axis, while the secondary buildings are laid out on parallel sides.

Amarbayasgalant was one of the very few monasteries to have partly escaped the destruction during the Religious purges of 1937, after which only the buildings of the central section remained. Many of the monks were executed by the country’s communist regime and the monastery’s artifacts, including thangkas, statues, and manuscripts were luted or hidden until more fortunate times.

Today, only 28 temples remained. Restoration work began in 1988 with funds provided by UNESCO and some of the new artifacts were commissioned in New Delhi, India.