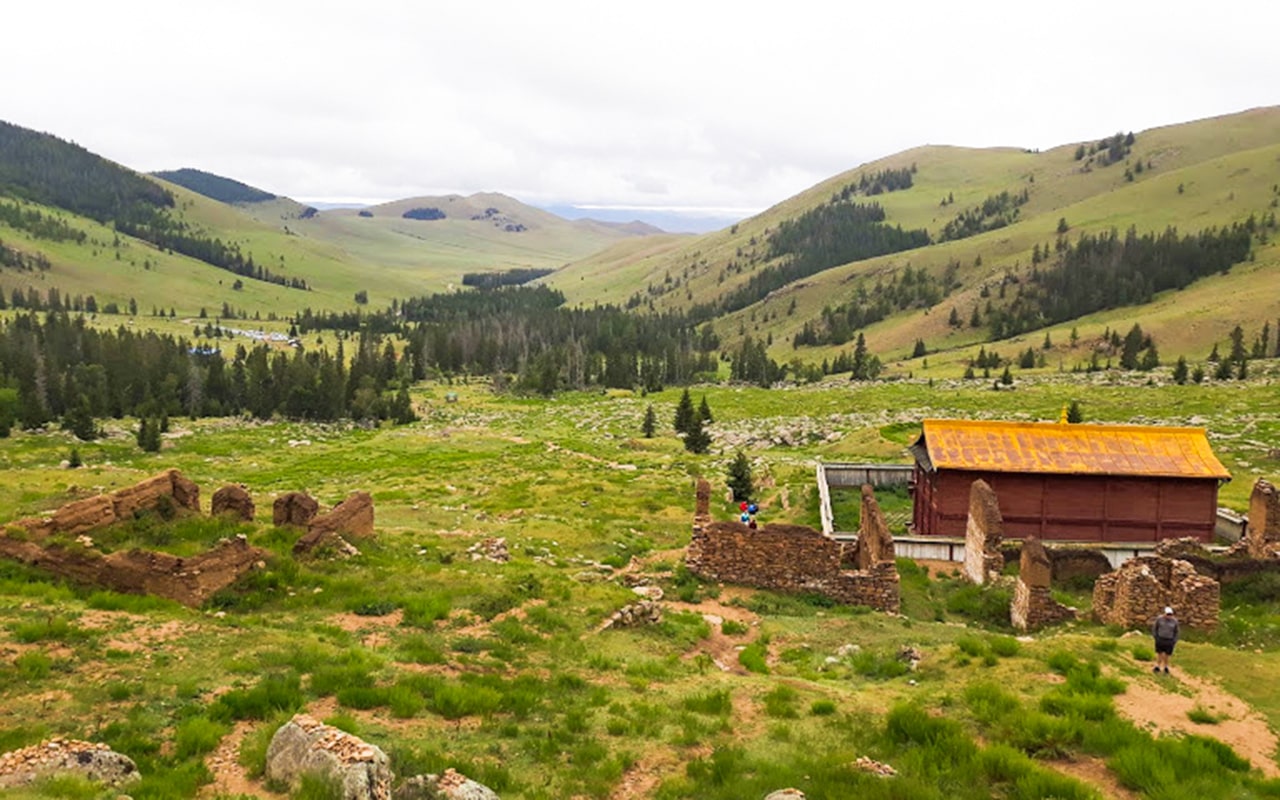 To prove its reason to be announced as the world’s first officially protected area, Bogd Khan National Park embraces all the characteristics of a beautiful nature. This park was founded in 1778, making it one of the world’s oldest protected areas. Manzushir Monastery was constructed in 1733 and was a major center of Buddhism, although now just the ruins of many fine temples remain.

The monastery was destroyed by Mongolian communists in 1937. Its ruins are located approximately 15km (as the crow flies, 43km by car) south of the Mongolian capital Ulaanbaatar on the south slope of Bogd Khan Uul Mountain.

The monastery, dedicated to Manjusri (Tib: Jampelyang – the Bodhisattva of Wisdom), was first established by the saint monk Luvsanjambaldanzan in 1733 as the permanent residence of the Reincarnation of the Bodhisattva of Wisdom. It came under the personal administration of Mongolia’s religious leader Bogd Gegeen in 1750. Over time, the monastery expanded became one of Mongolia’s largest and most important monastic centers with 20 temples and more than 300 monks. Religious ceremonies often involved more than 1000 monks. The lamasery housed a collection of valuable and rare Buddhist scriptures, including a golden script on silver leaves.

On February 3, 1921 the Bogd Gegeen sought refuge at the monastery after occupying Chinese troops released him before fleeing the advance of forces under Baron Ungern von Sternberg. The monastery’s chief abbot, Manzushir Khutagt Sambadondogiin Tserendorj, was then made prime minister during Ungern von Sternberg’s puppet regime (February to July 1921).

The monastery’s fortunes changed after the Outer Mongolian Revolution of 1921. In the early years following the revolution, Manzushir Khutagt Tserendorj allegedly collaborated with the physically weakened Bogd Khaan on various counter-revolutionary schemes, including sending messages for assistance to Japan. Following the Bogd Khaan’s death in 1924, the monastery and its inhabitants suffered waves of persecution as the socialist regime sought to eliminate the influence of institutional Buddhism within the country. In 1929–1930 Manzushir Khutagt Tserendorj had his personal property confiscated by the state and in 1936, at the start of Religious purges, he was one of 24 lamas arrested by Khorloogiin Choibalsan’s Interior Ministry for belonging to a “counter-revolutionary group.” In February 1937, the monastery’s last remaining 53 lamas (older than 50–60 years) were arrested, many of whom were later shot. All 20 temples of the monastery were then destroyed. The valuable Buddhist scriptures were moved to the Mongolian National Library. After a year-long trial Manzushir Khutagt Tserendorj was found guilty and publicly executed in front of the national theater in October 1937.

Restoration of the individual buildings began in 1990 shortly after the 1990 Democratic Revolution and in 1992 the executed monks were officially rehabilitated. In 1998 the ruins of the monastery were protected by the state. To date, only the main building has been rebuilt and is now a museum.

Next to the reconstructed museum stands the impressive (although in ruins) Togchin temple ruins, originally built in 1749 with architecture that recalls the temples of Tibet. In all, the ruins of 17 buildings, distributed over a rising terrain, can be identified throughout the vast area of the monastery. In the cliff above the monastery are several 18th Century Buddhist cave paintings and reliefs, as well as Buddhist inscriptions in the Tibetan language, which escaped destruction in 1937.
Not far from that is a 2-ton bronze cauldron created in 1726 engraved with a Tibetan inscription. It was used to provide food to the pilgrims and could boil up to 10 sheep and 2 cattle at a time.

Most of the area surrounding the monastery is part of the Bogd Khan Uul Strictly Protected Area which contains abundant wildlife, streams and cedar trees. In 1783 the local Mongolian government of the Qing Dynasty declared the Bogd Khan a protected site, making it one of the world’s oldest protected areas.

Today, the monastery serves as a tourist and hiking destination with an on-site hostel. The monastery was returned to the Buddhist church and the surviving objects within the monastery complex (the restored temple, the remains of walls and buildings, images of Buddhist deities and sacred inscriptions on the rocks) continue to be revered as objects of worship.