This annual festival, which celebrates the Golden Eagle as well as the hunters’ traditional culture, is arranged by the local Kazakh community and members of the Berkut Association, a community-based conservation organization. Historically, nomad Kazakhs have depended on the Golden Eagles for hunting. This expedition into the rugged Altai Mountains also includes opportunities to ride on horseback alongside the hunters, as well as visits to a local mosque, town market, provincial museum, and archaeological site.

In western Mongolia, deep within the Altai mountain range, an ancient tradition of hunting with Golden Eagles is still alive. The Kazakhs of Mongolia train their eagles to hunt rabbits and foxes. Once a year, hunters from all over Bayan-Ulgii province gather to celebrate this traditional skill and compete against one another in challenges that show off the abilities of both the birds and their trainers. Prizes are awarded for the fastest eagle, the best traditional Kazakh dress and more. You will also experience various art performances that are given during the festival. We take you to participate in this regional festival and visit Kazakh families, joining the hunters on hunting trips and see different sights in Bayan-Ulgii province, which is home to the Kazakh minority in Mongolia.

Living in the shadow of the majestic Altai Mountains, the nomad Kazakhs of western Mongolia live and prosper much as they have for centuries. They move seasonally in search of good pastureland for their livestock, maintaining one of the last enduring horse-based nomadic cultures in the world.

Sandwiched between China and Russia, the far west of Mongolia is also an area of stunning natural beauty. With forested valleys, clear alpine lakes, expansive meadows carpeted with wildflowers and spectacular snowcapped peaks (including Khuiten Uul, the highest peak of Mongolia), this area is a treasure of unspoiled wilderness. Until quite recently it was virtually untouched by the outside world.

The Kazakhs in this region still practice an ancient tradition passed down from their Turkic forebears: the art of hunting with trained golden eagles. Eagle hunting has been practiced in Central Asia for thousands of years (in fact, trained eagles killing a wolf it was mentioned the book The Travel’s of Marco Polo). Although the practice is rapidly disappearing in other centers of Kazakh culture, in Mongolia the tradition is alive and well preserved. Every year, just as the winter hunting season is getting underway, eagle hunters gather from all corners of Bayan-Ulgii province to celebrate the enduring tradition and to pit their birds against all comers. The competition tests, not just the bird’s mettle and the hunter’s skill, but also the bond between hunter and bird.

In addition to our visit with the Kazakh eagle hunters, we enjoy stopping in Khovd province exploring another unique aspect of western Mongolian culture: the ancient art of throat singing, or khuumii, as it’s known in Mongolia and Tuva. 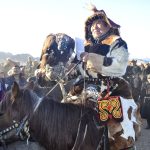 Do not hesitage to give us a call. We are an expert team and we are happy to talk to you.