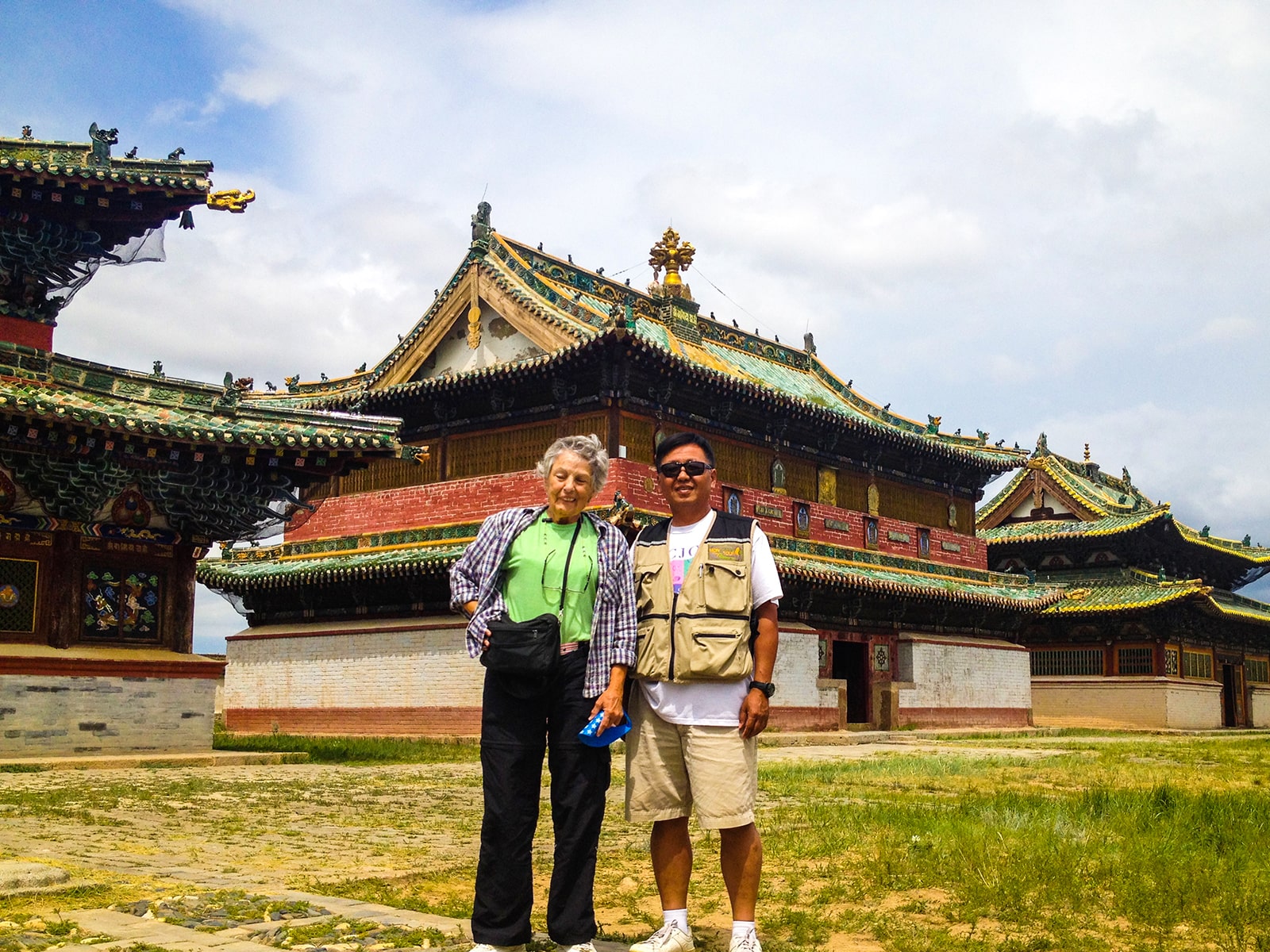 The Orkhon valley was the center of Xiongnu (Khunnu), Turkic and Uighur empires. To the Turkic, the nearby Khangai Mountains had been the location of the Ötüken, and the Uighur capital Kharbalgas was located close to where later Kharkhorin was located. This area is probably one of the oldest farming areas in Mongolia.

In 1218/19, Chinggis Khaan rallied his troops for the campaign against the Khwarezm Empire in a place called Kharakhorin, but the actual foundation of a city is usually said to have only occurred in 1220. Until 1235, Karakorum seems to have been little more than a ger town; only then, after the defeat of the Jin Empire, Chinggis Khaan’s successor Ugeedei erected walls around the place and build a fixed palace.

The name Kharkhorin or “Karakorum” means “dark brown” soil, derived from the word pronounced Khar Khuren, which has the same meaning as “dark brown”.

Under Uguudei and his successors, Karkhorin became a major site of world politics. Munkh Khaan has enlarged the palace and completed the great stupa temple. They also commissioned by the famous Silver Tree of Kharakhorin in the city center. The sculptor was a Parisian silversmith Guillaume Bouchier. A large tree sculpted of silver and other precious metals rose up from the middle of the courtyard and loomed over the palace, with the branches of the tree extended into the building. Silver fruit hung from the limbs and it had four golden dragon heads braided around the trunk. At the top of the tree rose angel holding a trumpet. When the Khaan wanted to summon the drinks for his guests, the mechanical angel raised the trumpet and to his lips and sounded the horn, whereupon the mouths of the dragon began to gush out a fountain 4 kind of alcoholic beverages wine, beer, mare’s milk and honey drink into the large silver basin arranged at the base of the tree.

William Rubruck, a Flemish Franciscan missionary and papal envoy to the Mongolians reached Kharakhorin in 1254. He has left one of the most detailed, though not always flattering, and accounts of the city. He compared it rather unfavorably to the village of Saint-Denis near Paris, and was of the opinion that the royal abbey there was ten times as important as the Khaan’s palace. On the other hand, he also described the town as a very cosmopolitan and religiously tolerant place, and the silver tree he described as part of Munkh Khaan’s palace has become the symbol of Kharkhorin. He described the walled city as having four gates facing the four directions, two-quarters of fixed houses, one for the “Saracens” and one for the “Cathay”, twelve pagan temples, two mosques, as well as a Nestorian church.

When Khubilai Khaan claimed the throne of the Mongol Empire in 1260—as did his younger brother, Arigbukh — he relocated his capital to Shangdu, and later to Dadu (today’s Beijing). Kharkhorin was reduced to the administrative center of a provincial backwater of the Yuan Dynasty founded in China in 1271. Even worse, the ensuing wars with Arigbukh and later Khaidu hit the town hard. In 1260, Khublai disrupted the town’s grain supply, in 1277 Khaidu took Kharkhorin, only to be ousted by Yuan troops and Bayan of the Baarin in the following year. In 1298/99 Prince Ulus Buqa looted the markets and the grain storehouses. However, the first half of the 14th century proved to be a second time of prosperity: in 1299, the town was expanded eastwards, in 1311 and again from 1342 to 1346 the stupa temples were renewed.

After the collapse of the Yuan dynasty in 1368 Kharkhorin became the residence of Biligt Khaan in 1370. In 1388, Ming troops took and destroyed the town. According to Sagan Setsen Erdeniin Tovch (Saghang Sechen’s Erdeni-yin Tobči) that the great khuraldai in 1415 decided to rebuild it, but no archeological evidence for such a venture has been found yet. However, Kharkhorin was inhabited at the beginning of the 16th century, when Bat-Munkh Dayan Khaan made it a capital once again. In the following years, the town changed hands between Oirads and Chinggisids several times and was consequently given up permanently.

Erdenezuu monastery stands near the site of Kharkhorin. Various construction materials were taken from the ruin to build this monastery. The actual location of Kharakhorin was long unclear. First hints that Kharkhorin was located at Erdene Zuu were already known in the 18th century, but until the 20th century there was a dispute whether or not the ruins of Kharbalgas, or Ordu-Baliq, were in fact those of Karakorum. In 1889, the site was conclusively identified as the former capital of Mongolia by Nikolai Yadrintsev, who discovered examples of the Orkhon script during the same expedition. Yadrintsev’s conclusions were confirmed by Wilhelm Radloff.

The first excavations were done in 1933/34 under D. Bukinich. After his Soviet-Mongolian excavations in 1948/49, Sergei Kiselyov concluded that he had found the remains of Uguudei Khaan’s palace. However, this conclusion has been put into doubt by the findings of the 2000-2004 German-Mongolian excavations, which seem to identify them as belonging to the great stupa temple rather than to Uguudei’s palace.

Findings of the excavations include paved roads, some brick and many adobe buildings, floor heating systems, bed-stoves, evidence for processing of copper, gold, silver, iron (including iron wheel naves), glass, jewels, bones, and birch bark, as well as ceramics and coins from China and Central Asia. Four kilns have also been unearthed.