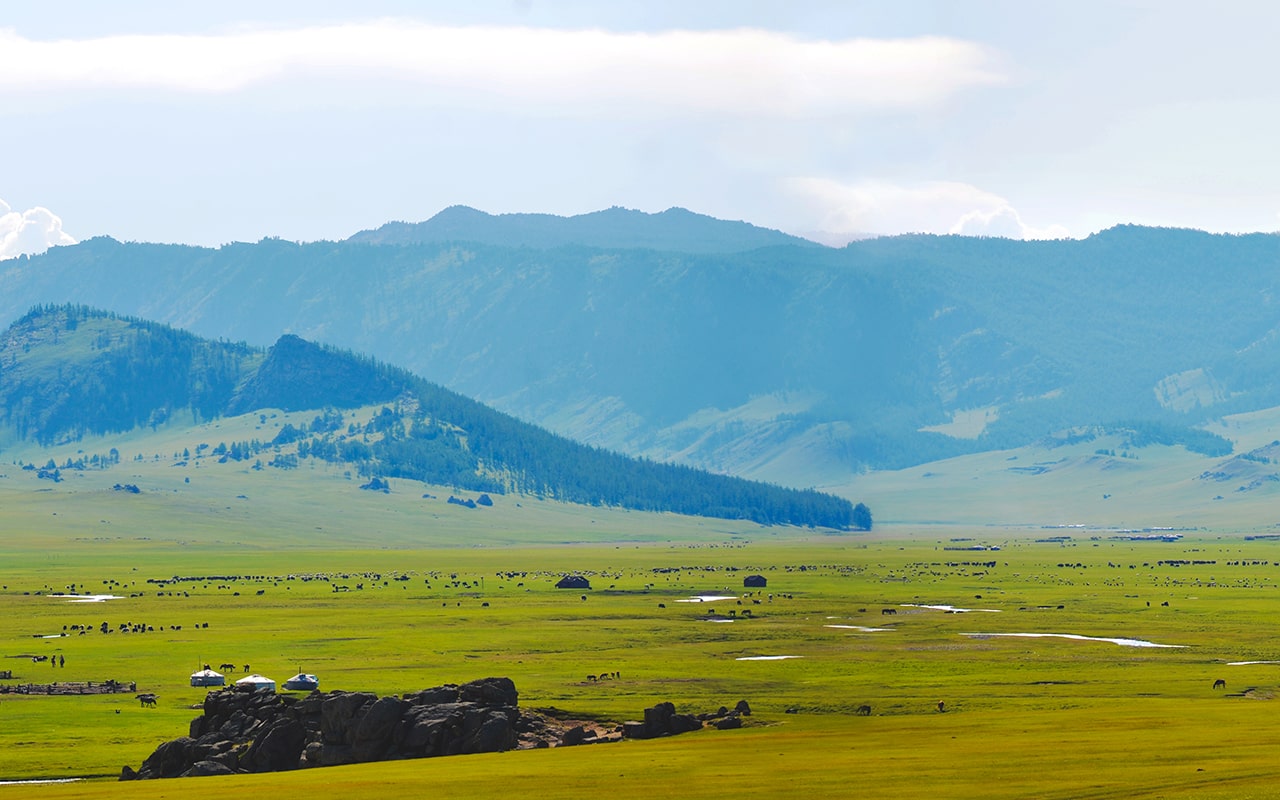 Arkhangai province has astounding scenery: wide rivers full of fish, several volcanoes and
volcanic lakes, extensive forests, and pastures where yak thrive. It also boasts the stunning lake
Terkhiin Tsagaan Nuur, the ruins of several ancient kingdoms and probably the nicest province
capital in the country. The ethnic groups are the Khalkh and the Uuld.
Arkhangai province is situated in the central part of the Khangai mountain range and its territory
comprises mountains, steppe and plains. The average altitude of the province is 7,920 feet
(2,414m) ASL. The highest point is the Kharalagtai peak clad in eternal snow at 11,611 feet
(3,539m) ASL, while the lowest point is the area of the confluence of the Orkhon and the Tamir
rivers at 4,232 feet (1,290m) ASL. Soil is mainly scattered grey and black soil of mountain
meadows and forests. Over 70 percent of the territory of the province is pasture land, almost 2%
with hay fields, about 1% with the sown area, and 15% of the territory is covered with deciduous
and coniferous forest. There are ibex, wild sheep, snow leopards, lynx, musk stags and bears in
the mountains, and marmots, susliks, foxes in the steppe. Several peaks rest under eternal snow
throughout the four seasons such as Suvraga, Noyon, and Khan-Undur, Khanui, Khunui. Orkhon,
Chuluut, South and North Tamir rivers gush from high Khangai mountain range and the Ugii,
and Terkh freshwater lakes. These rivers and lakes teem with taimen, grayling, scale, and perch.
There are many springs such as the Khadat, Mukhar Khujirt, Bora tal, Tsagaan suman, Beikh,
and many beautiful places like Khorgo dormant volcano and Taikhar Chuluu Rock. Around
1,700 species of flora can be found in the territory of the province of which 20% are medical
herbs. Rare species include roseroot, pheasant eye, and Saussurea involucrate. Arkhangai
province is rich in historical sites. There have been many finds from the Old Stone Age in the
basin of Orkhon, Tamir, Chuluut rivers, inscriptions of the Bilge Khan and Kultegen at Tsaidam
monuments in the Taikhar Chuluu and the Khashaat soum. Impressive are the ruins of the
ancient capital city of the Uighur Khanate in Khotont soum. The agriculture sector dominates the
economic activities of the province. There are about 45 square miles of arable land, used for
growing cereal, potatoes, and other kinds of vegetables. Local farmers harvest over 20,000 tons
of grain annually.
Much of Arkhangai, which means &#39;north Khangai&#39;, is on the northern slope of the spectacular
Khangai Nuruu mountain range. These are the second-highest mountains in Mongolia and are
protected by the Khangai Nuruu, Noyon Khangai and Tarvagatain Nuruu national parks.