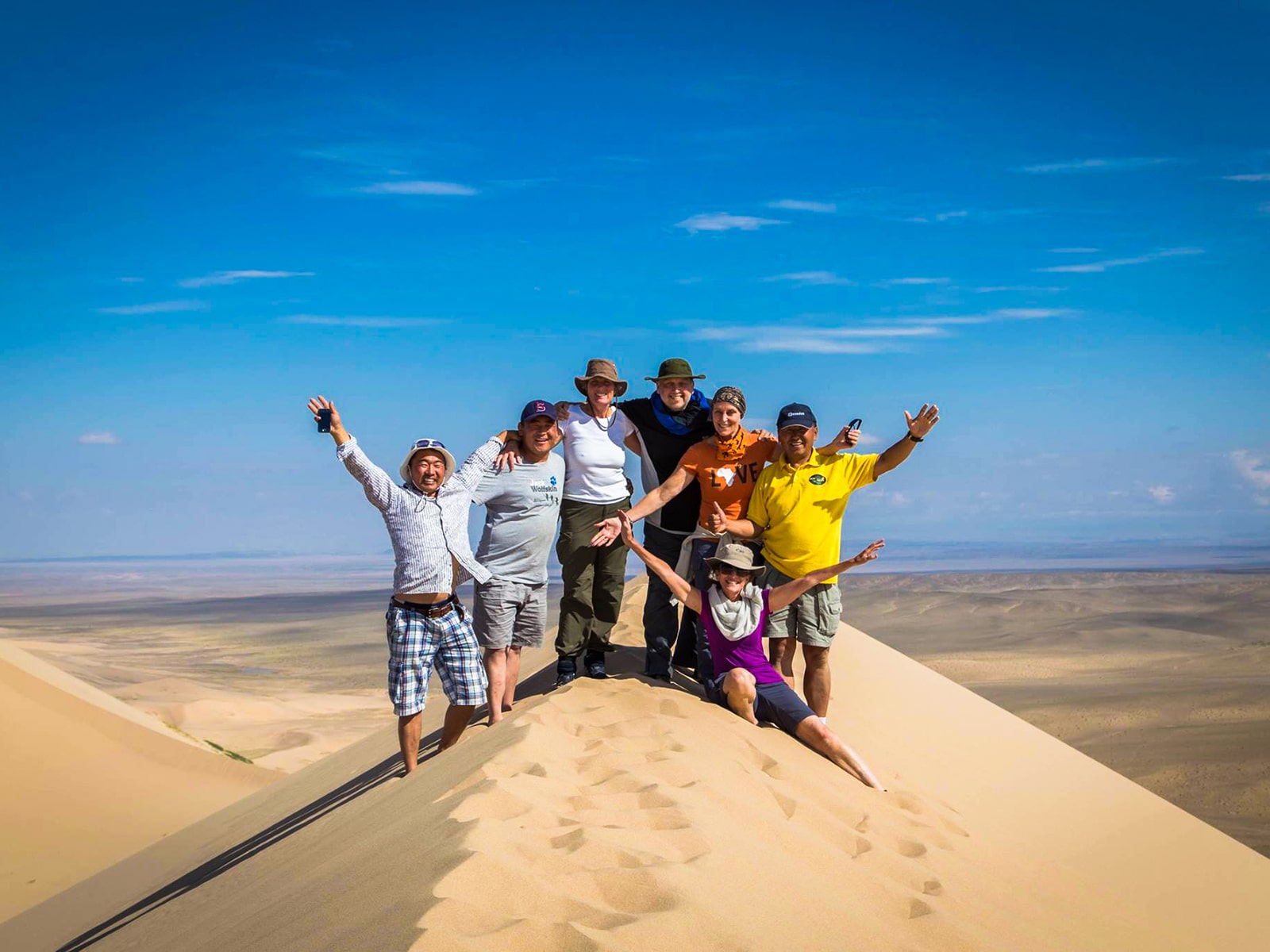 Umnugobi (South Gobi or Gobi Desert) province in southern Mongolia is Mongolia’s largest provinces, with a population density of only 0.3 people per square km. The few people who live here are the Khalkh ethnic group. It’s not hard to see why humans prefer to live elsewhere. With an average annual precipitation of only 130mm a year, and summer temperatures reaching an average of up to 38°C, this is the driest, hottest and harshest region of the country.

The Gurvansaikhan Nuruu range in the center provides the main topographic relief in this pancake-flat region. These mountains reach an altitude of 2825m and support a diverse range of wildlife, including the extremely rare snow leopard. The mountains also make human habitation marginally possible by capturing snow in winter, which melts and feeds springs on the plains below, providing water for some limited livestock.

South Gobi supports thousands of black-tailed gazelle, which you may see darting across the open plains. The province is also home to one-quarter (157,900 as of 2019) of Mongolia’s domesticated camels. The two-million-hectare Gurvansaikhan National Park protects a lot of wildlife and is home to dinosaur fossils, sand dunes and rock formations. The 1,839,176 ha Small Gobi Strictly Protected Area, in the south-eastern section of the province, is the last great bastion of the khulan or wild ass.

The territory of the province is semi-desert. The average altitude is about 4,265-5,249 feet (1,300-1,600m) above sea level. The famous tourist destinations include Gurvan Saikhan, Tost, Sevrei, Noyon Bogd, Nomgon, Nemegt, Altan and Gilbent, which are the extension of the Altai mountain range, and rise up to 9,843 feet (3,000m) ASL. The world’s famous Gobi desert is located in this province. Its parts are Khongor, Galba, Borzon, Zeemeg, Zag and Suuj sand dunes. Khongor sand dunes stretch about 36 sq. miles (92.5 sq.km), and its length is 115 miles (185km) and the width is 12 miles (20km). The average temperature is about 39°F (+3.9°C) in main areas, with the average in July 68°-77°F (+20°C to +25°C) and 59°-77°F (-15°C to -25°C) in January. The average precipitation is about 5 inches (133mm.). There are many cold springs in the province such as Khadaat, Nemegt, Zoloon, Enger buleen, Talkhit. The Elgen and Salkhit are hot springs. Over 250 species of flora grow in the territory of the Umnugovi province. Many medical herbs, such as astragalus, gentian, flavor nitracia, cynomorium, agriophyllium, and trees such as saksaul, oleaster, populus diversifolia and elm are found in Umnugovi.

The rare animals include wild horses, wild sheep, ibex, bald camels (wild camels). The province is famous for the black-tailed gazelles, white gazelles, lynxes, foxes, corsac foxes, rabbits and badgers. In the territory of the province there are many interesting places such as the mirror rock, and salt lake, beautiful oasis with groves of elm, populus diversifolia, cluster and vast valleys of sand dunes. Popular destinations are Gurvan Zeerd, Dulaan buut huge caves, the famous national park Yoliin valley, referred to as “Khangai of the Gobi”, Dungenee valley, and Kherem hillock. The southern part has bright soil, whereas the northern part soil is brown semi-desert. This province is well-known for dinosaur fossils as old as 60-80 million years, and findings from Stone Age, and Bronze Age. Also, there are ruins of ancient cities, fortifications, and ancient graves, and monuments. The main section of the economy is mining and animal husbandry.

Visiting extraordinary The Gobi you will not miss Towering sand dunes, 2 humped Bactrian camels, in the amazing horizon. Endless steppe and big blue sky above with jumping white gazelles are the typical pictures of Gobi Desert.

It continued exploring Lamargier vulture in the rocky valley of 3 Beauty Mountain. Since 1922 The Gobi is known to the world is home to Dinosaurs. There are numerous dinosaurs called by Mongolian names Such as Nemegtzaur. Even today there are more skeletons and eggs being found from the Gobi. So witness your Dinosaur skeletons in the Gobi area!