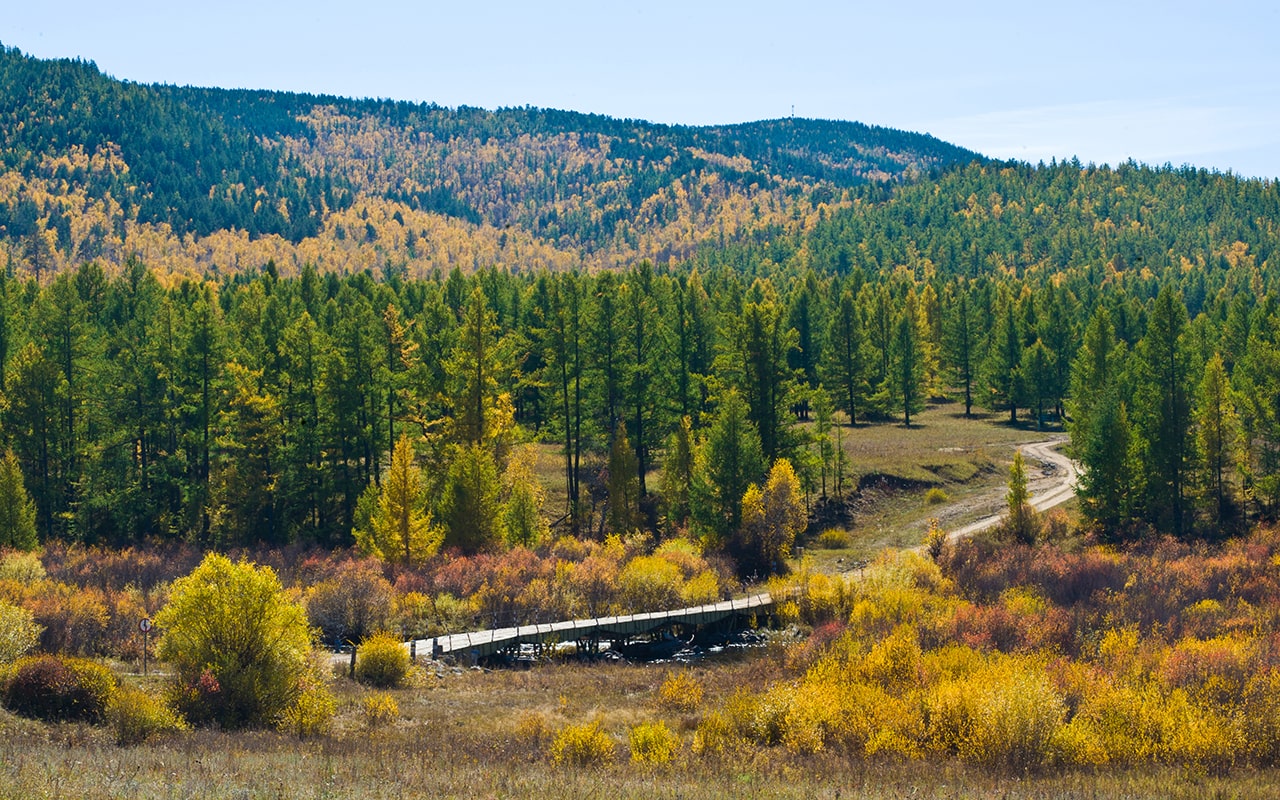 Khentii province accommodates part of the giant Khan Khentii Protected Area covering over 1.2 million hectares of the rugged Khentii mountains, is located in mountainous area in Kherlen, Onon, Ulz river basins in northern hemisphere on eastern half of the globe between 108° to 113° longitude and 46° to 49° northern latitude. Khentii province borders with Chita oblast of Russia to the north, with Dornod to the east, with Sukhbaatar and Dornogovi provinces to the south and with Govisumber to the southwest, with Tuv to the west and with Selenge provinces to the northwest. The territory of the province is a combination of mountainous and steppe zone. This province appertains to forest and steppe zone, and 16% of the whole northern region is elevated at 1,880-2,450m above the sea level and it has gallant forested mountains like Khan-Khentii, Noyon and Delgerkhaan. Khan-Khentii Mountain elevated at 2,451m above the sea level, Asraltkhairkhan at 2,799m ASL, is the highest point of Khentii province. Kentii province has a unique natural feature as the Eurasian coniferous forest taiga from the north meets the Central Asian arid steppe in the south.

Khentii province has a great amount of underground water resources. There are big and small rivers in northern forested areas of the province. Yet the southern steppe has much less underground and inflow water resources. There are over 70 rivers of a various size, including the three large rivers the Tuul, Onon, and the longest river of Mongolia with 1,090km in length Kherlen that have their sources from numerous springs at Khentii range, where lies the world watershed of three-huge drainage basins: the Arctic Ocean, Pacific Ocean and the Inland Basin of Central Asia. The Tuul flows northward across the Russian border and into Lake Baikal and on to the Arctic Ocean, the Onon and Kherlen both flow eastward to join Amur River before emptying into Pacific Ocean.

The province has over 90 springs and big lakes like Khar Zurkhnii Khukh Nuur Lake mentioned in The Secret History of Mongolia, Khangal Nuur Lake famous for its beautiful scenery, Hajuu spring and others that are involved with Chinggis Khaan’s history. There are dozens of hot and cold medicinal springs such that Gurvan Nuur, Onon, Avraga Toson, Tars, Arangatai and so on.

The climate, soil and landscape change as one goes from the West to East, The annual perception is about 8-12 inches (200-300mm).

The province land exhibits the richest diversity of plant and animal life. It is rich in wild berries, such as red and black currant, strawberry and blueberry as well as different kinds of medical herbs. Khentii is home to endangered musk dear and moose, brown bear, wolf, lynx, badger, weasel, sable, roe-deer, elk and squirrels. White gazelle, fox, steppe fox, marmots and hares come across in plenty in the steppe and grasslands.

There are many species of birds, including whooper swans, spoonbills, and great white egrets and raptors are found here. The land contains mineral resources such as gold, silver, smoky quartz, asbestos, tungsten, flour spar, coal, and iron ore, tin and copper.

In 2000, the 4,157km² the northeastern area of the province became the Onon-Balj complex. The 12,271кm² territory that includes state worshiped sacred Burkhan Khaldun mountain and Kherlen, Onon and Tuul rivers and their inflows at the heart of the Khentii range had been protected by the state since 1992. Around 800 archeologically significant historical remains such as graves, tombs, prohibitions of aristocrats were kept in this region. A place, where the eastern great steppes meet the mountainous region in the northeastern part of the region, which is called Toson Khultai by the locals and 4,700km² of this area became a natural reserve area in 1998. Hilly and timbered areas surrounding Khar Yamaat, Tumentsogt and other mountains form a fascinating natural complex of 506km² that became a natural reserved area in 1998.

Nowadays, Khentii province represents one of the tourist attractions. It has many historical places, especially related to the life of Chinggis Khaan, the Khaan, and founder of the Great Mongolian Empire, was born, grew up, raised to power, was crowned, and considered to be buried here. These attractions include Khukh Nuur (Blue Lake) – the place where Temuujin was crowned as Chinggis Khaan in 1206, Ikh Aurag (Palace) of Chinggis Khan-the site closely connected with the historical work “The Secret History of the Mongols” written in 1240, Deluun Boldog in Kherlen Khuduu Aral, often mentioned in this masterpiece, Gundgavirlan monastery built in 1660 and reopened in the 1990s, an impressive Chinggis Khaan Monument in the Gurvan Nuur, built-in 1962 to commemorate the 800th anniversary of his birth, the Galtai Agui (an 80m deep cave), and others.

In addition, there are other places of interest such as rock paintings, ruins of 13th and 14th century towns, Stone Walls of the Kidan Dynasty, Khajuu bulag and Oglogch walls, Khermen-zam. Baldan Bereeven, a Buddhist Monastery rebuilt in the 1990s, which is called the Drepung Monastery of Outer Mongolia or Ar Khalkha.